Whether you are looking for a last minute gift for mom - or want to take her to pick out her own - you can browse and shop for fine arts & crafts, eat delicious food and listen to live music!  More than 120 contemporary artists, live entertainment, children's activities and local restaurant fare are expected during this annual weekend event.

The Sounds of Summer Continue in Downtown Bethesda... 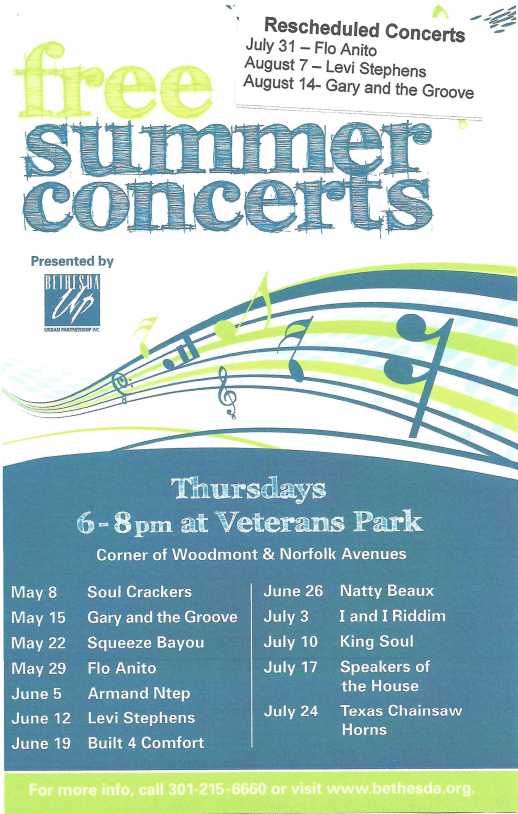 Here is the lineup for the remainder of the summer:

Five consecutive nights of blockbuster hits at this annual event!  Come view or favorite, or all 5!!  Why, not?  Its FREE!

A limited number of chairs will be provided and attendees are invited to bring their own lawn chairs.

The Annual Bethesda Fine Arts Festival is upon us and, as usual, coincides with Mother's Day Weekend! 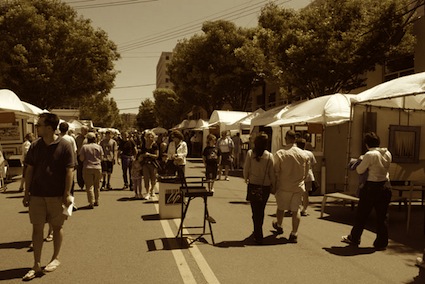 WHERE: Auburn & Norfolk Avenues in Bethesda

Weather you are looking for last minute shopping for mom, or just want to browse and shop for fine art & craft, eat delicious food and listen to live music - Bethesda is the place to be this weekend! According to the Bethesda UP website, there will be 130 artists from throughout the United States and Canada showcasing jewelry, furniture, painting, photography, sculpture and more. Click here for a list of participating artists.

In addition, the festival will have live musical, children's activities and good food from area restaurants.

Admission to the festival is free and free parking is available in the public parking garage on Auburn Avenue. This event is held rain or shine.

You know its getting close to summer (especially when the current temperatures in Bethesda and the DC area feel like July!) when Bethesda Urban Partnership starts promoting their annual Free Summer Concerts!  Each Thursday evening from 6-8 pm (from May through July) live music rocks Veterans Park in downtown Bethesda!  Here's a list of the thrilling events & groups coming this 2013 summer: 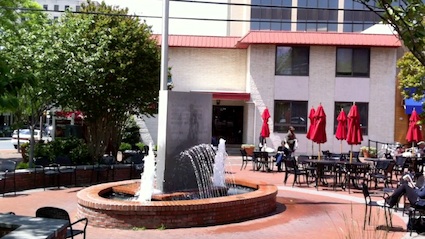 Don't hybernate - Come Out and Dine your way Through Downtown Bethesda & Chevy Chase! 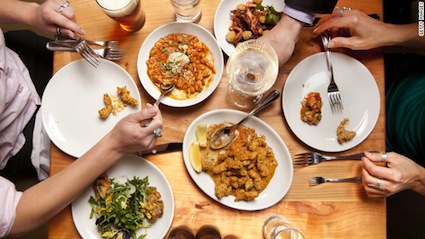 Yes, we know everyone just finished up one of the more intensive months of eating, but you don't want to miss out on the biannual tradition as Bethesda / Chevy Chase's winter Restaurant Week begins Thursday January 24, 2013 and runs through Sunday, February 3, 2013.  More than 20 Downtown Bethesda and Chevy Chase restaurants are participating in the 2013 Winter Bethesda-Chevy Chase Restaurant Week!

Participating restaurants will offer pris fixe gourmet cuisine items created exclusively for Restaurant Week. They will offer a 2-course lunch ($12 or $16) and a 2-course ($22) or 3-course dinner ($33), plus each restaurant will also offer its standard fare at regular prices.

Click here for a complete list of participating restaurants, along with phone numbers and links to make lunch or dinner reservations. Bon Appétit!

Though Downtown Bethesda will likely NOT look like the picture below, it does get you in the mood!  And so will will Bethesda's annual WINTER WONDERLAND celebration this coming weekend - Saturday & Sunday, December 1-2, 2012. 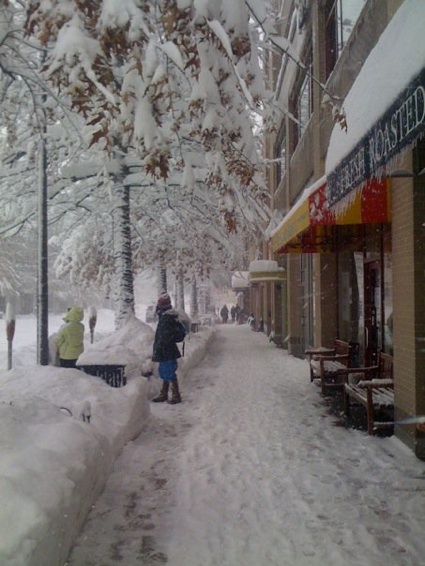 As in year’s past, be sure to make time on your busy schedule to be entertained and start the holiday celebrations early with Bethesda’s annual WINTER WONDERLAND, set this year for December 1-2, 2012. Many free performances throughout downtown Bethesda, a live ice sculpting presentation and more!

Saturday, December 1:  8:00 p.m.
The Winter Wonderland celebration begins at 8 pm with a concert featuring professional A Capella and gospel groups. Tickets to the concert are $10 for adults and $5 for children under 12.  Tickets for the concert may be purchased here --> https://btsolutions.securesites.com/event.php?id_event=3.

Bethesda is Having a Yard Sale - An Upscale Yard Sale! 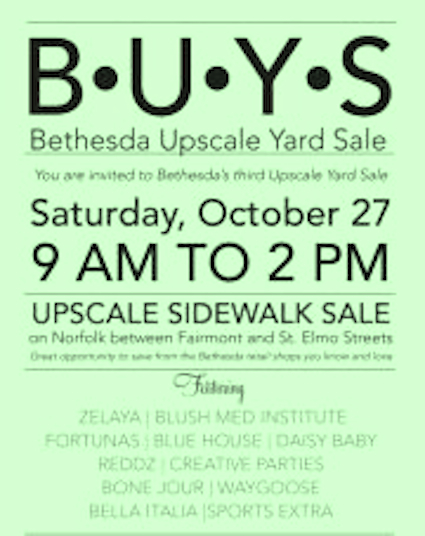 Join the following Woodmont Avenue area businesses for some great deals at this traditional Bethesda Event.  Saturday, October 27, 2012 from 9 to 2 p.m. on Woodmont Avenue between Fairmont & St. Elmo Avenues. 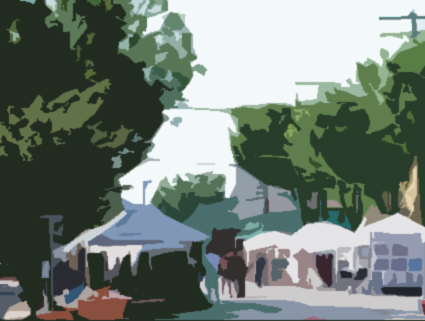 Regional artists offering original fine art and crafts of nearly 20 local and regional artists at the Bethesda Artist Market on July 14 from 10am - 4pm. Shop for painting, jewelry, photography, wood, pottery, glass and more! Live entertainment is also featured throughout the day (see below).

The Bethesda UP website lists participating artists as follows:

Imagination Bethesda, a children's street festival sponsored by Bethesda Urban Partnership, comes back to town on June 2, 2012!  This year the festivities will take place in the "other side" of Bethesda - at Norfolk & Auburn Avenues. This Saturday, June 2nd from 11 a.m. to 4 p.m. - come and celebrate with the whole family at this absolutely free event!   Activities include face painters, live entertainment, street dancing and more! 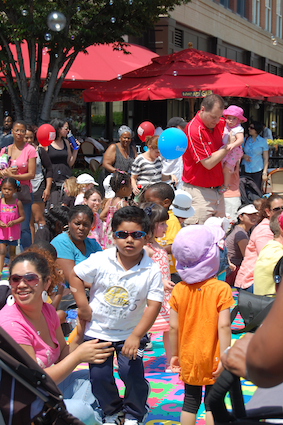 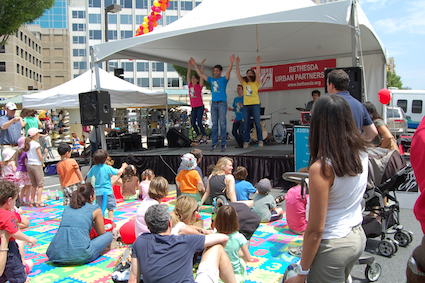 Learn more about design philosophies and amenities after picture gallery. For additional information and virtual tour, you may reference may featured homes displayed on every page of the site. For a new image gallery,

I’m un-aware if Downtown Bethesda has been given this distinction before but if not but it seems to fit the mold of one of the IDA’s most fundamental principal.

I’ve yet to find the Metrics the IDA uses determine their “Downtowns of The Month” but it's safe to say.

But an event like Bethesda Artist Market (which is tomorrow - sorry for the late notice!) seems to be microcosmic of what makes the urban core of Downtown Bethesda so vibrant, unique, progressive...and deserving of many awards.


I will be trying to add more to my Bethesda Centric real estate and lifestyle blog, GreaterBethesdaOnline.com (link below)

Posted by Gretchen Koitz on Wednesday, April 29, 2009 at 4:09:34 PM By Gretchen Koitz / April 29, 2009 Comment
One of the great things about living in the Bethesda area is being able to take advantage of the many “street fairs” that happen throughout the year. One of my favorites, the Bethesda Fine Arts Festival, is being held on Mother’s Day Weekend.

Recently ranked by Sunshine Artist Magazine (September 2008 issue) as #78 in the Top 200 Best Craft Shows, the Bethesda Fine Arts Festival will be held this year on Saturday, May 9th and Sunday, May 10th. Saturday hours will be from 10am to 6pm and Sunday goes from 10am until 5pm.

The location of the Bethesda Fine Arts Festival will be in the Woodmont Triangle area, using Norfolk, Del Ray and Auburn Avenues. There will be live entertainment, food from some of Bethesda’s most popular restaurants and, of course, fine crafts presented by 150 artists from around the country.

For detailed information on this year’s festival, see you can visit the offical website below. See you there!